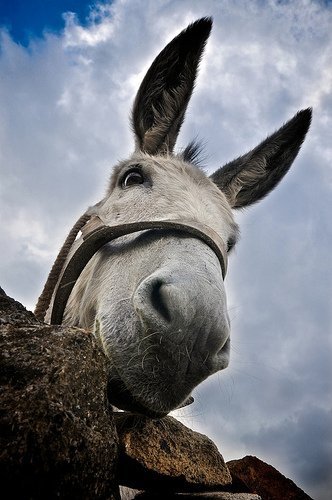 Smart Ass: Be Careful What You Wish For

It is not uncommon in the community of faith to find those who wish for “signs and wonders,”  by which they may more clearly know the will of God in their lives. Indeed, if you have been a Christian very long, it is very likely you’ve wished–even pleaded–for this. Consider:

People that are very dear to me strongly believe that God answers them, quite directly, when they inquire of Him in this way. Who am I to say that He does not?

Yet great theologians, like Jonathan Edwards, caution against such thinking:

“And yet some people actually imagine that the revelation in God’s Word is not enough to meet our needs. They think that God from time to time carries on an actual conversation with them, chatting with them, satisfying their doubts, testifying to His love for them, promising them support and blessings. As a result, their emotions soar; they are full of bubbling joy that is mixed with self-confidence and a high opinion of themselves. The foundation for these feelings, however, does not lie within the Bible itself, but instead rests on the sudden creations of their imaginations. These people are clearly deluded. God’s Word is for all of us and each of us; He does not need to give particular messages to particular people.”
― Jonathan Edwards

Here’s the rub. Can God deliver a custom message to someone? Yep! But if we’re the someone, do we really want to receive it? Maybe not so much. Consider the moronic and very pagan prophet, Balaam, who in Numbers 22 is met 3 times by God trying to tell him something. Balaam can’t figure out it’s the Almighty communicating. We learn that Balaam’s ass is smarter that his owner. The donkey is finally empowered to yell at his abusive boss.

Good thing we’re never as headstrong as Balaam, isn’t it?

Edwards questions those “particular messages” from God that promise support and blessings. But what if the Divine Message is of a less-uplifting kind? What if God is speaking to us in the events of our lives, even the negative ones?

Engage here. What do you think? Anyone in your life that needs to confront their Balaam?